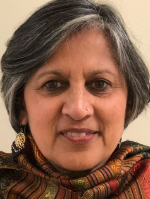 Dr. Huma Ahmed-Ghosh is a Professor in the Department of Women's Studies at San Diego State University. She is also on the Advisory Board of the Center for Islamic and Arabic Studies and the Center for Asia-Pacific Studies. Her research focuses on women in Afghanistan, Muslim women to the USA and India, women’s sexuality and Islam, gendered violence and conflict and Islam and feminism. She has published extensively on her research on the above topics and has published articles on gendered ageing in India, widowhood and domestic violence in India. Ahmed-Ghosh has published two edited books titled, Contesting Feminisms: Gender and Islam in Asia, and Asian Muslim Women: Globalization and Local Realities published by SUNY Press, New York (2015). She was a recent recipient of a Fulbright Fellowship (2018-2019) to India to research role of religion in the self-identity of Muslim youth. 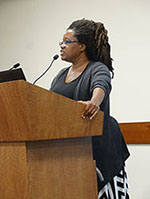 Kimala Price is an Associate Professor of Women’s Studies at San Diego State University. Her research focuses on U.S. reproductive health policy and politics; the activism of women of color within the reproductive justice movement; anti-abortion campaigns that target the African American community; visual politics; and the development of interpretive methods and methodology. Her work has appeared in journals such as Meridians: Feminism, Race, Transnationalism, Women’s Health Issues, Sexuality Research and Social Policy and the Journal of Feminist Scholarship, and in edited volumes such as Home Girls Make Some Noise: A Hip Hop Feminist Anthology. An activist scholar at heart, she has been active in the reproductive rights and reproductive justice movements for over two decades. She currently serves on the board of directors of Planned Parenthood of the Pacific Southwest, which serves San Diego, Riverside and Imperial Counties. She has a PhD in political science and a graduate certificate in women’s studies from the University of Michigan, Ann Arbor.